Holy Myrrhbearers Monastery, Otego NY, celebrated the 35th anniversary of their founding as a stavropegial women’s monastery of the Orthodox Church in America on 25 & 26 August 2012.  (A “stavropegial” monastery is one which falls directly under the omophorion of the primate of the church rather than under a local diocesan bishop).  The weekend events also celebrated the 40th anniversary of monastic-life profession for Mother Raphaela, Abbess of the monastery; and the 50th anniversary of monastic-life profession of Mother Michaela, a nun with the Holy Myrrhbearers Sisterhood for nearly a decade.  Mother Raphaela was presented with a jeweled cross by Archbishop Tikhon on behalf of the Holy Synod of Bishops of the OCA.  In addition, before the Divine Liturgy on Sunday, Sister Deborah was tonsured to the riassa by the hand of Bishop Matthias.  Hierarchs, clergy, friends and supporters from across the country and from many Orthodox jurisdictions joined the milestone celebrations!

Bishop Michael was among four hierarchs concelebrating the Divine Liturgy on Saturday in Binghamton NY.  His Grace, who has been acting as the liaison between the monastery and the OCA, was instrumental in the planning and coordination of this celebration. He was joined at the monastery on Saturday evening and Sunday morning by Bishop Matthias, who concelebrated the services. Bishop Matthias had previously been assigned to serve at the monastery and Saint Innocent Mission parish prior to his election and consecration as Bishop of Chicago and the Diocese of the Midwest.

In his homily on Sunday, Bishop Michael spoke about the similarities of Christian living between monastics and non-monastics:

“In the Gospel story of the Rich Young Man, the rich man asks the right question -- and he gets the right answer -- but he makes the wrong choice.  The answer he got was not the answer he wanted.  The Kingdom of Heaven is not gained by one deed, but by a way of life: give up our possessions and follow Christ.  You will notice that the young man’s name is not recorded in the Gospel.  Contrast that with the life at this monastery.  The monastic turns her back on the world, and the way of the world, and its tensions.  This is not a ‘one act’ choice.  Mary Magdalene, Salome, Susanna, Mary and Martha, Mary the wife of Cleopas -- they all followed the Lord in the dirty streets of Jerusalem, to the Sea of Galilee, and they were there during His passion.  And, they were the first to see Him risen.  Prayer, work, sacrifice, study, service happen here at this monastery.  We are called to do the same.  Monastic services are more complete, but we must also find a way to pray throughout the day.  Monastic services are organized in “sevens,” and we also are called and can pray as often: in the morning, prior to three meals, in the evening, with our children, pray with our spouses.  In between these times, we pray at the start of any work, and also pray the Jesus prayer.”

On behalf of the monastery, Mother Raphaela extends her thanks and gratitude to Father Ilya and Matushka Julia Gotlinsky, and the Holy Dormition parish in Binghamton NY for hosting Saturday’s Divine Liturgy and assisting in advance preparations for the celebration. Under Matushka Julia’s direction, the choir rehearsed and sang beautiful responses during the Hierarchical Divine Liturgy.

Father David Poling, who has been serving as rector of Saint Innocent Mission since June, was among the clergy celebrants during the entire weekend.  He was joined by his wife, Matushka Emilita, and their children, Elias, Miriam, and John.  Father David remarked:

“It was a joy for Saint Innocent Mission to participate in the monastery's anniversary celebration, and to celebrate the anniversaries of Mother Raphaela and Mother Michaela.  From the beginning, the Mission has relied upon the generosity and hard work of the Mothers and Sisters of Holy Myrrhbearers Monastery.  We are grateful for their love and guidance.  They are truly our spiritual mothers and sisters in Christ.  Many Years!”

Special thanks are also extended to Father James Dutko (American Carpatho-Russian Orthodox Diocese of the USA) who served as the Master of Ceremonies at Saturday's banquet.  Father Jim and his wife, Pani Kathy, have been long-time friends and supporters of the monastery.

The celebrations were a manifestation of joy in the Lord, and represent a meaningful and special milestone for monasticism in North America.  May God grant many years to all who have supported Holy Myrrhbearers throughout the years!  May God bless the Sisterhood as they continue to serve Christ and His Holy Church! 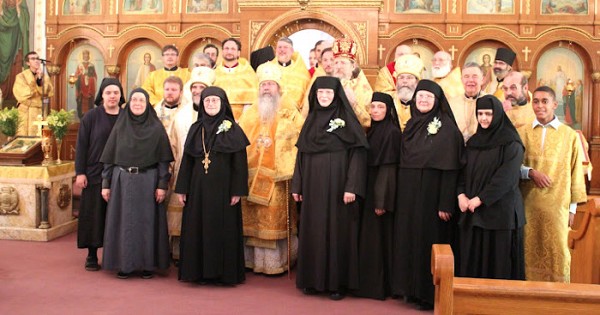