Hushed silence, hearty laughs, and even some clapping could be heard at Holy Apostles Church in Saddle Brook NJ when the Konevets Quartet from Saint Petersburg Russia performed a concert of both hymns and folk songs on the evening of Tuesday, 24 June 2014. The concert lasted about two hours and drew over 100 people from diverse backgrounds. Orthodox churches in the area were represented including: OCA, Russian Patriarchal, Ukrainian, Antiochian, and Greek parishes. There were also a dozen parishioners from Saint Philip’s, the neighboring Catholic church.

The first half of the concert featured a wide selection of Orthodox hymns mostly in church Slavonic, but also some in Greek. There were pieces of Georgian, Serbian, Znammeny, and Byzantine chant as well as selections by Bortynansky, Tchaikovsky, and Chesnokov. The second half of the performance contained Christmas carols like "The Bells Rang Early in Jerusalem," romances like "The Long Road," patriotic songs like "On the Hills of Manchuria," well-known songs like "Moscow Nights," and even humorous songs like "Pierogies with Cheese!"

After the concert, light refreshments were served as many congregated to chat and discuss the evening's event. 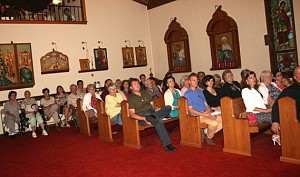