The 5th Anniversary celebration of Holy Apostles Mission in Lansing (Ithaca) NY took place on the weekend of 8-9 August 2015. Archbishop Michael led the festivities having previously celebrated the 125th Anniversary of Saints Peter & Paul Church in Buffalo NY, the oldest parish in the diocese. As a testimony to the faithful endurance of Orthodox Christians in the diocese and the blessings of the Lord, His Eminence followed the 125th Anniversary commemoration by traveling 150 miles south-east to lead the faithful of one of the youngest parishes in its anniversary celebration. Nine local clergy representing three jurisdictions as well as faithful from throughout the diocese and beyond came together to give thanks to God for the tremendous blessings that have been poured out on this young, vibrant community.

In addition to festive liturgical celebrations on Saturday and Sunday, a celebratory meal brought together the mission faithful and guests gathered in mutual love and common joy at the Lansing Community Center.

In his homily, Archbishop Michael reflected on the value of joining prayer and fasting for the benefit of growth in the faith and the furthering of Christ’s Holy Gospel. “The challenge is to be part of an organization as the Holy Apostles were ... to combine their trust in the Lord which we call faith and prayer -- a conversation with God,” said His Eminence. His words were a call for all to be imitators of the Apostles, so the vineyard planted in Lansing would have a chance to flourish.

Ending his homily with words of encouragement and challenge, Archbishop Michael reminded the faithful to “Be warned, when you become stronger you become a higher target for the evil one. So he will attack you even greater, and you will have to struggle even harder. Work even more and raise that level of discipline all the more! But, it will bring you closer to the God who multiplied the loaves and the fishes, enabled Peter to walk on water, and healed the son of the man who no one else could help.”

“The preaching of His Eminence was an encouraging lesson,” said Father James Worthington (Rector),“and will surely provide aid in the continued growth of Holy Apostles Mission.”  He continued, “As a sign of our gratitude to God for His protection throughout our first five years, we made our yearly donation to the Distinguished Diocesan Benefactors Program in the amount of $555 so as our mission continues on its spiritual journey we join in the encouragement of love and support from all of our brothers and sisters in the diocese, and humbly ask for their prayers toward our continued growth.” 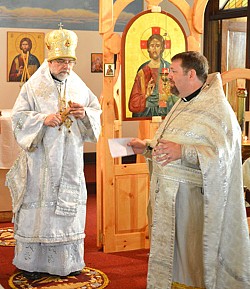