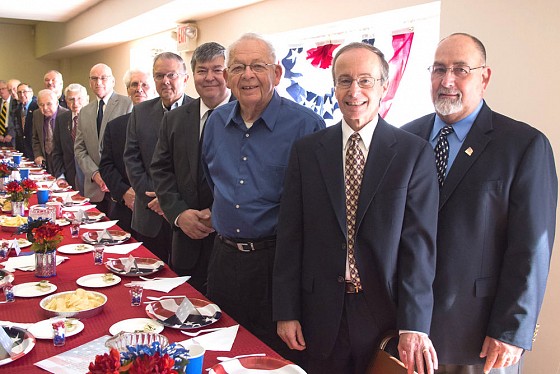 November 11, or what has come to be known as Veterans Day, was originally set as a U.S. legal holiday to honor Armistice Day - the end of World War I, which officially took place on November 11, 1918. President Woodrow Wilson honored the first commemoration of Armistice Day with the following words: "To us in America, the reflections of Armistice Day will be filled with solemn pride in the heroism of those who died in the country’s service and with gratitude for the victory, both because of the thing from which it has freed us and because of the opportunity it has given America to show her sympathy with peace and justice in the councils of the nations..."

In 1954, Congress, at the urging of the veterans service organizations, struck out the word "Armistice" and inserted the word "Veterans." With the approval of this legislation on June 1, 1954, November 11 became a day to honor American veterans of all wars.

Between 1968 and 1975, Veterans Day was moved around on the calendar, sometimes even appearing on the last Monday of October. Finally on September 20, 1975, President Gerald R. Ford signed a law which returned the annual observance of Veterans Day to its original date of November 11, beginning in 1978.

Veterans Day continues to be observed on November 11, regardless of what day of the week on which it falls. The restoration of the observance of Veterans Day to November 11 not only preserves the historical significance of the date, but helps focus attention on the important purpose of Veterans Day: A celebration to honor America's veterans for their patriotism, love of country, and willingness to serve and sacrifice for the common good. A listing of active duty and retired

As many parishes throughout the diocese commemorated Veterans Day 2015, Holy Trinity Orthodox Church in Randolph NJ honored its veterans in a special way. Father David Fox (parish rector) included the names of living and departed veterans during a litany offered during the Divine Liturgy.  A luncheon event followed featuring photos of departed veterans and a head table for the living vets who were escorted by uniformed Boy and Girl Scouts. Children led the community in singing the National Anthem and “America the Beautiful.” Founders Hall was decorated with red-white-and-blue bunting and all who attended enjoyed a cake decorated as the Stars and Stripes. “Thank you to all who serve and have served!” Dear Lord,
Today we honor our veterans,
worthy men and women
who gave their best
when they were called upon
to serve and protect their country.
We pray that you will bless them, Lord,
for their unselfish service
in the continual struggle
to preserve our freedoms, our safety,
and our country’s heritage, for all of us.
Bless them abundantly
for the hardships they faced,
for the sacrifices they made
for their many different contributions
to America’s victories
over tyranny and oppression.
We respect them, we thank them,
we honor them, we are proud of them,
and we pray that you will watch over
these special people
and bless them with peace and happiness.
In Jesus’ name we pray; Amen.