The 6th Annual Diocesan Altar Servers Retreat was held at Saint Basil’s Academy in Garrison NY from Friday, 12 February to Sunday, 14 February 2016. Over fifty participants were present for all or part of the weekend. Altar servers and clergy came from each of the three deaneries (New Jersey, New York City and New York State) as well as from the Carpatho-Russian Diocese. Archbishop Michael, together with multiple priests, an archdeacon, as many other adult altar servers also came to share in the revitalizing weekend. The retreat was blessed with young men and boys who came to learn about serving with a bishop while enhancing all of their skills as servers at the Lord's altar.

As the youths and young men arrived on Friday evening, they shared in a pizza dinner and recreational time, which is always popular. The night concluded with evening prayers in the beautiful chapel.

A Hierarchical Divine Liturgy was celebrated on Saturday morning at which half of the young men served, while the other half populated the choir. These groups switched on the following day, giving each group the opportunity to study under experienced directors of these two aspects of the services.

Classes with His Eminence and Reader Daniel Drobish followed the sumptuous breakfast.  Archbishop Michael taught the history and vesting of the episcopal vestments, while Reader Daniel Drobish, an educated and accomplished choir director, offered the young men principles of liturgical singing. It is the hope of His Eminence and the organizers of the retreat that the young men take this knowledge back to their home parishes and enhance the beauty of the divine services.

The evening was stacked with fun, as the men and boys spent some recreational time swimming, playing basketball, using the fitness room or playing board games.  Joyous laughter in fellowship was heard in all quarters. The assembly came together again for Great Vespers, followed by a thrill-packed session of “Orthodox Jeopardy.” This year, the teams were evenly matched, with Team B squeezing out a win by a single point.

For Sunday morning’s Divine Liturgy, a lesson on the preparation of the bread and wine, the proskomedia, was presented by Father Anthony (Falsarella), the chaplain at Saint Basil’s Academy. During the Divine Liturgy, the young men and boys sang with voices like an angelic choir and served with renewed skill. After brunch, the weekend came to a close as each of the participants headed back to their corner of the Diocese to share and teach what they had recently received.

The next Altar Servers Retreat is scheduled for 10-12 February 2017 at Saint Basil’s Academy. Mark your calendars now! The Department of Youth Ministry is already working on some exciting things to offer during next year’s retreat. 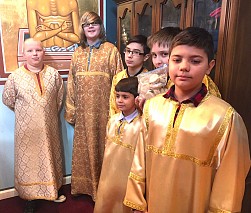