ENTRY OF OUR LORD INTO JERUSALEM In the Name of the Father, the Son and the Holy Spirit.

Today Christ enters the path not only of His sufferings but of that dreadful loneliness which enshrouds Him during all the days of Passion week. The loneliness begins with a misunderstanding; the people expect that the Lord's entry into Jerusalem will be the triumphant procession of a political leader, of a leader who will free his people from oppression, from slavery, from what they consider godlessness - because all paganism or idol-worship is a denial of the living God. The loneliness will develop further into the dreadful loneliness of not being understood even by His disciples. At the Last Supper when the Saviour talks to them for the last time, they will be in constant doubt as to the meaning of His words. And later when He goes into the Garden of Gethsemane before the fearful death that is facing Him, His closest disciples, Peter, John and James - whom He chose to go with Him, fall asleep, depressed, tired, hopeless. The culmination of this loneliness will be Christ's cry on the cross, "My God, My God, why hast Thou forsaken me?" Abandoned by men, rejected by the people of Israel He encounters the extreme of forsakenness and dies without God, without men, alone, with only His love for God and His love for mankind, dying for its sake and for God's glory.

The beginning of Christ's Passion is today's triumphal procession. The people expected a king, a leader - and they found the Savior of their souls. Nothing embitters a person so much as a lost, a disappointed hope; and that explains why people who could receive Him like that, who witnessed the raising of Lazarus, who saw Christ's miracles and heard His teaching, admired every word, who were ready to become His disciples as long as He brought victory, broke away from Him, turned their backs on Him and a few days later shouted, "Crucify Him, crucify Him!" And Christ spent all those days in loneliness, knowing what was in store for Him, abandoned by everyone except the Mother of God, who stood silently by, as She had done throughout her life, participating in His tragic ascent to the Cross; She who had accepted the Annunciation, the Good Tidings, but who also accepted in silence Simeon's prophecy that a sword would pierce her heart.

During the coming days we shall be not just remembering, but be present at Christ's Passion. We shall be part of the crowd surrounding Christ and the disciples and the Mother of God. As we hear the Gospel readings, as we listen to the prayers of the Church, as one image after another of these days of the Passion passes before our eyes, let each one of us ask himself the question, "Where do I stand, who am I in this crowd? A Pharisee? A Scribe? A traitor, a coward? Who? Or do I stand among the Apostles?" But they too were overcome by fear. Peter denied Him thrice, Judas betrayed Him, John, James and Peter went to sleep just when Christ most needed human love and support; the other disciples fled; no one remained except John and the Mother of God, those who were bound to Him by the kind of love which fears nothing and is ready to share in everything.

Once more let us ask ourselves who we are and where we stand, what our position in this crowd is. Do we stand with hope, or despair, or what? And if we stand with indifference, we too are part of that terrifying crowd that surrounded Christ, shuffling, listening, and then going away; as we shall go away from church. The Crucifix will be standing here on Thursday and we shall be reading the Gospel about the Cross, the Crucifixion and death - and then what will happen? The Cross will remain standing, but we shall go away for a rest, go home to have supper, to sleep, to prepare for the fatigues of te next day. And during this time Christ is on the Cross, Christ is in the tomb. How awful it is that, like the disciples in their day, we are not able to spend one night, one hour with Him. Let us think about this, and if we are incapable of doing anything, let us at least realize who we are and where we stand, and at the final hour turn to Christ with the cry, the appeal of the thief, "Remember me, Lord, in Thy Kingdom!" Amen. 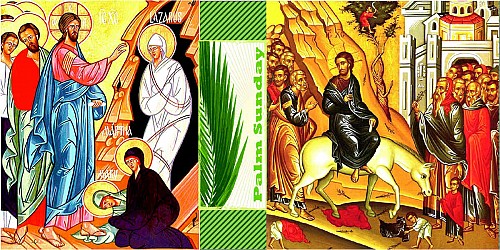 By raising Lazarus from the dead

before Your Passion, O Christ God,

You confirmed the universal resurrection.

we cry out to You, O Vanquisher of Death:

“Hosanna in the highest!

Blessed is He that comes

in the Name of the Lord!”