Order of Saint Romanos
"MANY YEARS!"

The visit of Archbishop Michael to Saints Peter & Paul Church in Jersey City NJ on the weekend of 21-22 May 2016 went beyond the regular annual visitation. Following Saturday Vespers, His Eminence greeted and spoke with the faithful and, at the conclusion of the Sunday Liturgy, on behalf of the Holy Synod of Bishops (Orthodox Church in America) he awarded the “Order of Saint Romanos” to Aleksei Shipovalnikov. The Holy Synod conferred this honor for extraordinary contributions in the field of liturgical music.

A native of Rostov-on-Don, Russia, Aleksei Viktorovich Shipovalnikov served as Artistic Director and Manager of the Moscow State University Symphony Orchestra and Academic Choir. His post-graduate studies included a master class with Leonard Bernstein in Moscow in 1988. He has also conducted in West Germany and Poland, where he established a reputation for innovative programming in spite of the political risks involved during the communist era.  Such ventures included the presentation of the first Stockhausen Festival in the USSR and the establishment of the “Fellowship of Musical Evenings” in Moscow under the auspices of Moscow University and the Russian Musical Society in 1985.  Mr. Shipovalnikov immigrated to the US in 1990 and has been a guest lecturer at Columbia, George Washington, Princeton, Stanford and Southern Methodist Universities and Professor of Liturgical Music at Saint Tikhon’s Seminary, South Canaan, PA.  In 1991, he was appointed Music Director of Slavyanka Men’s Slavic Chorus.  Two years later, he recorded the world premiere of Shvedov’s “Liturgy of Saint John Chrysostom” for Harmonia Mundi. In 1994 he was named Artistic Director of the Concertino Chamber Orchestra in Moscow and, in the same year, he directed choral selections for the musical soundtrack of the film, Little Odessa, with Twentieth Century Fox.  He is Founder and Director of the Spirit of Orthodoxy Choir and Music Director at Saints Peter and Paul Orthodox Church, Jersey City, NJ.

Mr. Shipovalnikov is the son of +Protopresbyter Viktor and +Matushka Maria Borisovna, faithful servants of the Russian Orthodox Church.

Aleksei will commemorate the 40th anniversary of choral directing next year.

Congratulations and “MANY YEARS!” 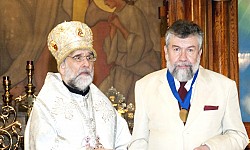