After the arrival of Archbishop Michael in the late afternoon, Vespers were served by the Parish Rector, Father John Chupeck. A “Tea Social around the samovar” proved to be a well-received conclusion to a very busy day. Very satisfying ethnic foods, quenching tea beverages and Russian Tea Cookies amongst many other fine tasting goodies were available for all to enjoy. For those seeking the “spiritual food,” confessions were heard by His Eminence and Father John. The day was brought to a close with anticipation and expectation of joy as the faithful awaited the next day’s observance.

The day began with the Church filled with faithful as they awaited Archbishop Michael’s entrance into the Temple for the celebration of the Hierarchical Divine Liturgy. His Eminence was presented with a bouquet of roses by Elena Kantor; traditional bread and salt by Alexander Scott Anderson (parish warden); and the Holy Cross by Archpriest John Chupeck (parish rector). After Archbishop Michael’s vesting in the center of the church and the reading of the Third Hour, Alexander Scott Anderson was tonsured a Reader by the hands of His Eminence.

Then, the beautiful and heavenly Divine Liturgy began. His Eminence was assisted by six priests, one deacon, four sub-deacons and four acolytes. All was enhanced by the absolutely beautiful responses of the Saints Peter & Paul Choir under the direction of Larissa Sovyrda. During the Little Entrance, His Eminence, on behalf of the Holy Synod, awarded Father Michael Speck the dignity to wear the Gold Pectoral Cross in recognition of his nearly 30 years of devoted service in the Lord’s vineyard. Father Michael’s son, Sub-deacon Michael, and the other Sub-deacons (Nilus Klingel, Sebastian Parker and Andrew Bohush), served well to keep the ceremony flowing smoothly and in good order as they worked together with Father Deacon Mark Bohush.

Before the conclusion of the Divine Liturgy, His Eminence presented Father John Chupeck with a Palitza (a thigh-shield of protection imaged with an icon of the Lord Christ as well as the Blessed Virgin Mary), in recognition of his 50 years of faithful priestly service. Certificates of Recognition (Gramotas) were presented to the Church and its faithful, the Rector, and many individuals for their unselfish and outstanding work fulfilling God’s commandments. Archbishop Michael preached both days with beautiful and heartfelt words about God’s direction and the life of the Church.

The celebration then proceeded to the Holiday Inn in Liverpool NY where 234 souls enjoyed the banquet. The main speaker was Father John Parker III from Mount Pleasant SC (Chairperson, Department of Evangelization, Orthodox Church In America). Father Parker was electrifying with, as they say down South, “God is Good – All the Time!” He addressed the need to evangelize and welcome visitors and seekers into our churches. Using the symbols of bread and salt, we should be reminded that we must be as the salt of the earth, as the followers of Christ, and not lose our ‘savor.’ We have been baptized, Chrismated, communed, empowered by the Holy Spirit, and should want to make use of these gifts because they are life; alive and from God Himself. We were each given a challenge: a salt shaker with Colossians 4:5-6 inscribed on it: “Conduct yourselves wisely towards outsiders, making the most of the time. Let your speech always be gracious seasoned with salt so that you may know how you ought to answer every one.”

The youth of our parish, two-dozen-plus, presented a spirited ethnic dance program for the enjoyment of all, especially those in the “dinosaur” category. They brought back great memories, fun and wholesome memories from times past.

At the conclusion of the beautiful and exciting day in the Lord, parish home-bound crews delivered takeout dinners, commemorative books, and icons to the shut-ins unable to join in the great celebration.

Glory to God For All Things! 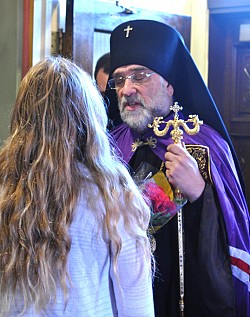