The 100th Anniversary of Saint Nicholas Church in Whitestone NY was celebrated on 18 September 2016. Sunday morning found the congregation eagerly waiting to greet Archbishop “Vladika” Michael. Bread, salt and flowers were presented to greet His Eminence by Paul Tymus and his granddaughter, Heather. After worship, parishioners and guests gathered nearby for a festive banquet and dance. The 100th Anniversary of Saint Nicholas Church was a time of gratitude for God’s abundant blessings, memories shared, fine fellowship and joyful festivity. 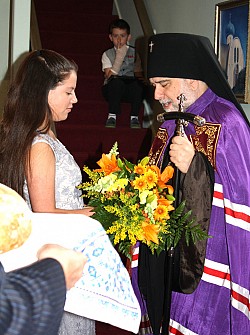