During the Archpastoral visit of Archbishop Michael to Saints Peter and Paul Church in Endicott NY on the weekend of 10-11 November 2018, sixteen Catechumens (the Card family) were received into the church by Holy Baptism and Chrismation (anointing). The presence of the Holy Spirit was truly felt by all as His Eminence exclaimed: “The Seal of the Gift of The Holy Spirit!” 180 times with the choir and congregation singing “Amen!” as many times in response. During the Hierarchical Divine Liturgy, Archbishop Michael tonsured five young men to the rank of Reader:

“Several festal receptions were held throughout the weekend,” said Father Karlgut, “with the feeling of joy and thanksgiving. No words are sufficient to describe the sense of gratitude for Archbishop Michael's care and love for his flock. Thank you, Vladyko!” 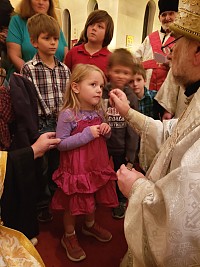