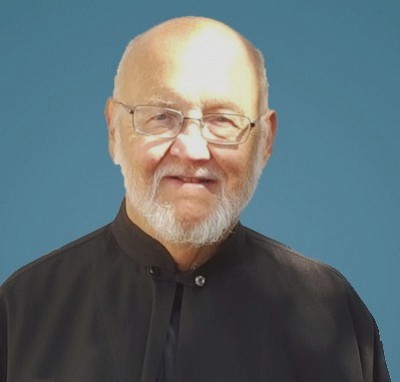 Deacon Simeon, son of the late Charles H. Peet Jr. and Grace L. Terry, is survived by a younger brother, Charles H. Peet III (Carmen Urquizo Gamarra) of St. Catharine’s, Ontario, Canada and Cusco, Peru; a cousin, Randy Bennett Robinson (Aaron) of Shohola, PA; and many good friends. Fr. Simeon attended Johnson City secondary schools, was graduated from Georgetown University’s School of Language and Linguistics in 1967, and did graduate work in biblical Hebrew and Aramaic for three years at The Catholic University of America’s Department of Semitic and Egyptian Languages and Literatures and Koine Greek at the University of Richmond.

Father Deacon Simeon retired from the Library of Congress in April 2000 after 33 years of service, having been head of the Hispanic Acquisitions Program for more than a decade. His interests included early ecclesiastical history, Byzantine studies, art and classical music.  He was an inveterate traveler in all 50 states and more than 50 countries, with a particular love for Italy and the American Southwest, author of nine books, editor of three, and author of numerous articles in various journals.

Relocating to his hometown area in late 2004, he enrolled in and graduated from the St. Tikhon’s Seminary Diaconal Formation Program and was ordained to the Holy Diaconate in 2012. Attached at the time of his repose to the Dormition of the Virgin Mary Orthodox Church in Binghamton, New York, in spite of his growing infirmities Deacon Simeon continued an active schedule of his diaconal ministry up until a few days before his passing.

The family will receive friends at Dormition of the Virgin Mary Orthodox Church, 54 Baxter Street, Binghamton, New York, on Tuesday, August 20, from 5:00 – 7:00 PM.  A Panikhida service will be celebrated at 6:30 PM.  On Wednesday, August 21, the Divine Liturgy with Litya for the Departed, celebrated by His Eminence, Archbishop Michael, will begin at 10:00 AM. Burial will follow in Floral Park Cemetery, Johnson City, New York.

In lieu of flowers, expressions of sympathy may be sent to Dormition of the Virgin Mary Orthodox Church, 54 Baxter Street, Binghamton, New York 13905.

May Deacon Simeon’s memory be eternal!