Christ the Savior Church in Paramus NJ sowed a healthy seed of faith in 1960 and, as the blossoming good fruit increased over the next 21 years, ten parishes were organized and formed in the New Jersey Deanery. It was a time of growth throughout the United States as a vision of “Expanding the Mission” was offered and motivated by Metropolitan Leonty (primate of what would become the Orthodox Church in America, 1950-1965).  The parish joyously celebrated its 55th Anniversary on the weekend of 26-27 September 2015 with a visit by Archbishop Michael in liturgical celebration and festive fellowship.

His Eminence, Archbishop Michael, celebrated a Vigil service on Saturday evening and the Divine Liturgy on Sunday as faithful gathered along with a host of parishioners and friends. Serving with His Eminence at the Eucharistic celebration were: Father David Vernak (Parish Rector), Father Samuel Kedala, Father Victor Gorodenchuk, Father Stephen Vernak, Deacon David Maliniak, and Sub-deacon Mark Federoff. Prayerful responses were sung by the choir under the direction of Theodora Gramkow.

“If we were to describe the banquet, we  would say it was a large, loving family celebration,” said Matushka Eugenia Nehrebecki, “with our dynamic and loving Archbishop Michael.” 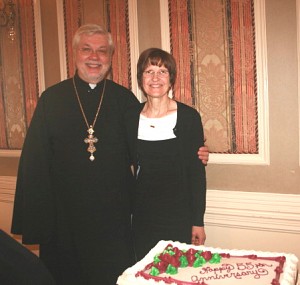