Learn how to plan and hold a successful Vacation Church School (VCS) program, that can be effectively used for one-day or two-day parish youth events and retreats throughout the year, to draw in youth and families who are not regularly attending. Participants will take home two detailed VCS lesson plans to use in their parishes.

Preamble
We, the members of the Assembly of Canonical Orthodox Bishops of the United States of America, promote and uphold the sacred and inviolable essence of human life. The continued challenges of our time prompt us to publish a more comprehensive statement of the Orthodox Church’s regard for human life and, in particular, the termination of human life. Prepared by our Committee for Church and Society, and affirmed by the Assembly as a whole, this statement seeks to succinctly articulate Orthodox Christian teaching for the faithful and to continue the Church’s tradition as a beacon and witness to life as freely given by our good and loving Creator... 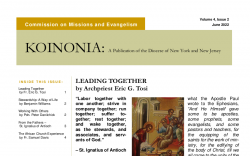 The latest issue of KOINONIA is now available for download and distribution in the parishes. KONIONIA is the quarterly newsletter published by the Diocesan Commission on Missions and Evangelism, under the editorship of the Director of that Commission, Archpriest Eric Tosi, and with the blessing of His Eminence, Archbishop Michael. 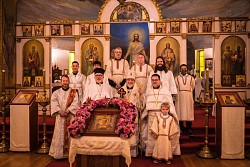 [Buffalo, NY] - A joyous day of celebration was experienced at Saints Peter and Paul Church, Buffalo NY the weekend of May 21-22 with a visit by Archbishop Michael. Around 95 parishioners, family and friends were in attendance for the Hierarchical Divine Liturgy in which Father John P. Hutnyan was honored by His Eminence with the elevation to Archpriest, and awards of the Gold Cross and the Nabedrennik. The parish hosted a beautiful dinner following Liturgy. His Eminence, Archbishop Michael is instructing that every parish rector and one or two parish council members (or more) must attend this conference. It is important that each parish is represented and has the opportunity to participate in these meaningful discussions. Becoming Rich Towards God: A Workshop on Money and the Incarnation - 05/25/22

[Jewell, NY] - Saint Andrew's Camp's new building is moving forward fast!!! After many hurdles and struggles, and with the support of so many of the faithful of our diocese, this building now has walls, a roof, electricity, alarm systems, and windows. Fundraising for this project began three years ago, and with the generous response of so many churches and individuals, we were able to finalize plans last summer and break ground.

[Endicott, NY] - On Saturday, May 7, 2022, on the feast of Repose of Saint Alexis Toth, Confessor and Defender of Orthodoxy in America, Archbishop Michael marked his 12th anniversary of Consecration to Episcopacy. Eis polla eti, Despota! Bringing the joy of Pascha to a little-served region of upstate New York, a Paschal Divine Liturgy was served in Plattsburgh, New York, on Bright Saturday, April 30, 2022. Archpriest Terenti Wasielewski, Rector of St. Nicholas Church in Cohoes, New York, celebrated the Liturgy, joined by 10 faithful laypersons. The singing was led by Mark Wolosen, choir director of the Cohoes parish. This initial Liturgy is the first of a series of services planned to determine the viability of a potential future Mission Station in Plattsburgh.

It's time to celebrate!

With the blessing of Archbishop MICHAEL, the Department of Youth Ministry would like to honor all high school and college graduates from our diocese by featuring their accomplishments in Jacob's Well, the official magazine of our diocese.

In order for this to happen, we need your help!

Please consider participating in the St. Andrew’s Camp Bicycle Ride. The bike ride is a charity event supporting OUR Camp and Its mission to support OUR children. The Ride is a fun way to donate to the Camp.  More information to follow. Brick, NJ - On Bright Wednesday, His Eminence, Archbishop Michael served Paschal Vespers at the Orthodox Christian Church of the Annunciation in Brick, NJ. Concelebrating with Archbishop Michael were the clergy of the New Jersey Deanery of the Diocese of New York and New Jersey. After the Vespers, Very Rev. Gary Breton presented a check of $18,000.00 to Father Kenneth Ellis of Holy Ghost Orthodox Church on behalf of the Diocese of New York and New Jersey. Holy Ghost Orthodox Church and it's rectory were damaged by Hurricane Ida the last September. Temporarily, the parish of Holy Ghost utilizes the upper hall of Saints Peter & Paul Church in Manville.

Sunday, May 1 marks the 50th Anniversary of the Priestly Ordination of the late Rt. Rev. Mitred Archpriest Andrew Skripnik Kuharsky.

Earlier this year, the Assembly of Bishops unanimously approved a proposal for the Mental Health Task Force to develop a clergy and leadership training program titled Peace of Mind.  Peace of Mind is a composite of a preexisting, clinically-based course (Mental Health First Aid) that is augmented by an original, theologically-based presentation (Orthodox Bridging).  We believe that Peace of Mind is an essential component in our ongoing work of cultivating a culture of mental wellness within our community while also recognizing the fullness of health through the context of Christ and the Orthodox Church. 00022
JOIN ARCHBISHOP MICHAEL, TO PRAY AND FAST
FOR RECONCILIATION AND AN END TO CIVIL STRIFE

The clergy and faithful of the Diocese continue to mourn the tragic losses of life, the needless acts of violence, the divisions among races, and the civil strife which plague many of our cities and countrysides...