On 24-25 September 2016, the Orthodox Cathedral of the Transfiguration of Our Lord in Williamsburg, Brooklyn NY celebrated its 100th anniversary and the 108th anniversary of the parish. At Divine Liturgy commemorating the celebration, the parish welcomed His Beatitude Tikhon, Archbishop of Washington and Metropolitan of America and Canada, along with His Eminence, Archbishop Michael, Bishop of New York and the Diocese of New York and New Jersey. The Hierarchs were joined by Archpriest Wiaczeslaw Krawczuk (parish rector), visiting clergy, deacons, sub-deacons, and many altar servers. The Cathedral has long stood as a regional landmark. It is the oldest Slavic-background Orthodox parish in Brooklyn and one of the oldest in New York City. The parish was established in 1908 by Slavic-heritage immigrants with Carpatho-Russian, Belarusian, Ukrainian, Russian, Polish, and various other ethnic-cultural backgrounds.

The first church, a former Methodist Church adapted for Orthodox worship, was located on North 5th Street. The church grew under its first rector, Archpriest Theophan Buketoff, leading the parish to purchase the current site on North 12th Street. Construction began in 1916 on the church with a design based on the Cathedral of the Formation in the Moscow Kremlin, Russia. Archbishop Platon blessed the church on September 3, 1922.

The Cathedral is the spiritual home to many Orthodox Christians in the Tri-State area, but it is also the “Mother Parish” to churches parishioners went on to worship in Upstate New York, Long Island, and across the East Coast. “We were overjoyed that many former parishioners from far-away places across the United States returned to celebrate the church’s centennial,” said Barbara Krawczuk.

The celebration began on Saturday, September 24 with Vespers and Litya, followed by a Great Panikhida with special prayers for the parish’s ancestors. Before the Panikhida, Archbishop Michael addressed the faithful in attendance and spoke about the importance of the jubilee and what it represented for the parish.

On Sunday, September 25, the celebrations continued with a Hierarchical Divine Liturgy.  Supplications were offered to for the Cathedral’s future and the health and success of its parishioners. Before the start of the Divine Liturgy, Archbishop Michael, Father Wiaczeslaw, and other clergy members welcomed Metropolitan Tikhon at the entrance of the Cathedral. The church Council President, Igor Petelski, greeted His Beatitude with bread and children presented a bouquet of flowers. After His Beatitude was vested in the center of the church, Archbishop Michael tonsured Konrad Petelski to the rank of Reader.

In his homily, Metropolitan Tikhon  highlighted that in 1916 it was already remarkable how deep Orthodox roots were in this area. He also called on parishioners to remember that the parish had withstood many difficult times including both World Wars, the depression, and the Korean and Vietnam Wars. He reminded parishioners that they formed the soul of the church through their love and prayer.

Before the end of the Divine Liturgy there was a procession around the church which included readings from the Gospel and blessings with holy water on each side of the Cathedral. Neighboring priests joined the centennial celebration following Divine Liturgies in their own churches. Those who came included Archpriest Alexander Revyuk from Holy Trinity Church in Brooklyn; Archpriest Daniel Degyansky from Woodside NY; and Father Igor Kseniuk from Passaic NJ.

The celebratory lunch after the Divine Liturgy began with The Lord’s Prayer, followed by the “Star-Spangled Banner” sung by Mrs. Eugenia Kurianowicz. Father Wiaczeslaw began the speeches by greeting everyone in attendance. Igor Petelski, the President of the Parish Council, gave a toast to the 100th Jubilee. Sub-deacon Peter Andryuk gave a brief history of the parish, its founders, and previous rectors. Ann Kandratino, President of the Sisterhood of the Myrrh-bearing Women, and newly tonsured reader Konrad Petelski (President of the St. Herman Brotherhood), explained their work in the church and thanked all the parishioners that support their organizations. Mrs. Audrey C. Podhaiski, the longtime Church School Director, spoke of the Church School’s activities and thanked the parents, guardians, and teachers that had helped support the Church School for generations.

His Beatitude, Metropolitan Tikhon, gave his blessing to all those in attendance. His Eminence, Archbishop Michael, thanked all the parishioners and reminded them of the importance of passing the Orthodox faith to their children in order to form the next generation of faithful.

“It was special to have so many people attend the celebration, to remember our history, and pray for our future,” said Barbara Krawczuk. “We pray that with the continued prayers and support of our parishioners and friends the Cathedral will stand as a testament of our faith and history for at least another 100 years!” 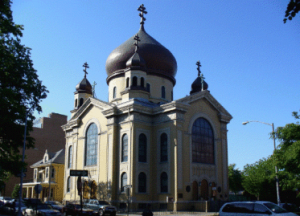